Construction crews on the Caldecott Tunnel project completed the excavation of the fourth bore in August. Work on the 3,389-foot-long bore began in January 2010 and is on schedule to be completed by late 2013. Tutor-Saliba is the General Contractor on the $402 million project that is being done with all union labor.

Laborers Local 304 Business Manager Fernando Estrada said there were on average about 40 laborers on the project, mostly with Tutor-Saliba, as well as subcontractors like Foxfire Constructors from southern California, which specializes in mining and tunneling. Estrada said almost all the work done in the tunnel is done by laborers, including miners or “tunnel hands,” who are represented by the Laborers union.

“The tunnel hands are a special breed,” Estrada said. “They have specialized training for safety, dealing with potential dangers like pockets of gas. They install fans and exhaust vents, do asphalt paving, digging, earth removal, and handle specialized equipment.” Estrada said many of the miners travel all over the country to work; the union has an agreement to allow workers from out of state to work locally. He said they have “rustling rights” for the specialized tunnel work.

Ivy Morrison, Caltrans’ spokesperson for the fourth bore project, said the completion of the excavation marked an important milestone. She said now that the tunnel excavation is complete crews are installing a rebar cage and pouring the concrete tunnel structure and lining. The first step is to apply a waterproofing membrane made of a polymer-based material over the top of the smoothed shotcrete that has already been applied throughout the length of the tunnel. For the final lining, the contractor will cast a wall of reinforced concrete by assembling a rebar cage, constructing formwork to contain the concrete and pouring the concrete through holes in the form and then plugging the holes when the wall space is filled.

The Fourth Bore is being excavated using a Sequential Excavation Method. A Caltrans press release noted that during tunneling, the installation of structural support is performed in sequence; each round of excavation is followed by the application of shotcrete and the installation of rock dowels. Sequential excavation enables engineers to continually monitor and respond to the changing ground and rock conditions within the tunnel. Tunnel crews can make adjustments to the levels of structural support by varying the length of excavation, varying the thickness of the shotcrete lining or, in especially unstable areas, excavating an invert.

Caltrans reported that, since the Fourth Bore is being dug in an area that has trace amounts of naturally occuring hydrocarbons, the construction crews are required to use tunnel-safe equipment, including an electric powered, 130-ton Wirth roadheader on the eastern end, a modified Caterpillar 330 excavator on the western end, a ventilation system to maintain air quality in the tunnel, and have special safety training. 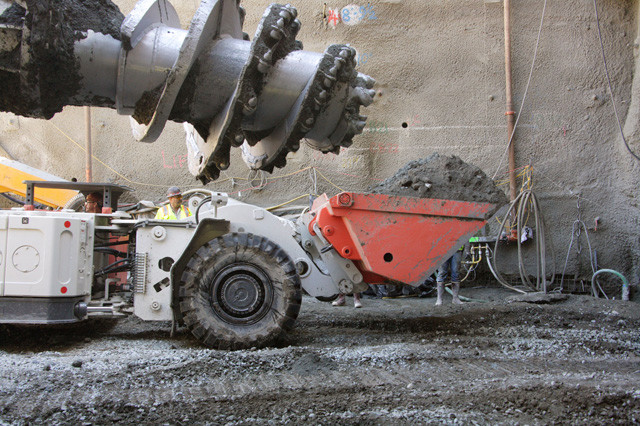 Other work includes installation of the drainage, ventilation and electrical systems. The tunnel will feature 19 jet fans and porcelain-coated steel panels covering the walls. The project will also include seven emergency cross passages between the third and fourth bores. To date, crews have completed excavation of two of the seven cross passages.

Other trades on the project include Operating Engineers, Carpenters, Electrical Workers and Ironworkers.

The Caldecott Fourth Bore Project is a partnership between the California Department of Transportation (Caltrans), the Contra Costa Transportation Authority (CCTA) and the Alameda County Transportation Commission (ACTC) to build a two-lane fourth tunnel bore north of the existing three Caldecott tunnels. The fourth bore of the Caldecott Tunnel will add two lanes to the existing six that cut through the Berkeley Hills, connecting Orinda to Oakland. When it opens to traffic in late 2013, it will provide congestion relief along a heavily traveled portion of State Route 24 between Alameda and Contra Costa counties. The first two bores, with were completed in 1937, and the third, northernmost bore, built in 1964.

A Caltrans press release notes that, “With State Route 24 carrying about 160,000 vehicles per day traveling through the three tunnels, the new fourth bore will relieve congestion in the off-peak direction (eastbound in the morning and westbound in the afternoon), and eliminate the need to switch the direction of traffic flow in the middle bore to accommodate shifting traffic demands. When the Fourth Bore Project is completed, two bores will be permanently dedicated to westbound traffic and two bores to eastbound traffic.”

The project is primarily funded by a mix of local, state, and federal funds, including from the local transportation sales tax (Measure J) passed by Contra Costa voters in 2004 and by Regional Measure 2 (Bay Area bridge tolls). It received $180 million through the American Recovery and Reinvestment Act of 2009 (ARRA).

“The fact that the Caldecott Fourth Bore Project is one of the largest recipients of Recovery Act funding in the nation is a true testament to the regional importance of this project,” said Steve Heminger, Executive Director of the MTC.

“With significant federal, state, regional and local support, this project serves as a prime example of how all levels of government have come together to improve California’s infrastructure,” said Acting Caltrans Director Malcolm Dougherty.

As excavation on the west side proceeds crews will begin working on the waterproofing and concrete lining that must be in place before the final concrete is poured for the arch and roadway surface.

photo:
This gantry system is a frame that slides on a track to facilitate installation of the tunnel waterproofing and final lining.