Construction crews are making progress on the rebuild of Highland Hospital’s acute care tower in Oakland. Clark Design/Build of California is the general contractor for the Acute Tower Replacement (ATR) project being built for Alameda County. Clark is a signatory contractor to agreements with the Carpenters and Laborers unions and has had crews of union workers on the project since 2010. While the project isn’t being done under a project labor agreement, it is a prevailing wage job. Many of the subcontractors are union.

Highland Hospital is owned by Alameda County and operated by the Alameda County Medical Center. The Alameda County General Services Agency is managing the ATR Project. The County requires that 20 percent of contractors and vendors on the project are small, local, emerging businesses (SLEB). Clark reports that 19 SLEB firms have been procured for work, and 89 firms have been procured for work under the County’s Enhanced Construction Outreach Program designed to ensure that small, minority-owned local businesses are included.

When completed in 2017, the ATR project will bring Highland Hospital into compliance with the State of California’s seismic safety laws. Senate Bills 1953 and 306 require that all acute care hospital buildings meet seismic-safety requirements by 2020. In addition to meeting seismic safety standards, the ATR project will allowHighland Hospital to provide healthcare in a new state-of-the-art building. Highland Hospital’s upgrade is one of many in the Bay Area that are under construction or scheduled to begin construction to meet the seismic safety regulations. They include new Kaiser hospitals in Hayward and Oakland, Alta Bates Summit hospital in Oakland and San Francisco General Hospital.

Highland Hospital’s upgrade is being done in three overlapping phases. Construction of the new 3-story Highland Care Pavilion began in late 2010 and was completed earlier this year. The 78,000 square-foot medical office building opened in June. It houses campus-wide support functions and outpatient clinic services currently located in the existing Acute Tower. The facility was built over a 176-space parking structure and will include connectors to the new hospital. The old Clinic and Auditorium were demolished to make way for construction of the new Highland Care Pavilion.

Phase Two is the construction of a new 9-story, 169 bed Acute Care Tower to house inpatient, maternal and child, and support services currently located in the existing Acute Tower. Built above a below-grade central utility plant, the tower will include intensive care, medical/surgical beds, and labor and delivery, neonatal intensive care, and miscellaneous diagnostic, treatment, and support functions. Construction began in 2010, with the steel frame building rising to the ninth floor earlier this year. Concrete wall pours began in February and are continuing, along with installation of stairs and underground utility work. Scaffolding was erected this summer and exterior work has begun. The Acute Care Tower is expected to be complete in 2016. At that time, the hospital’s existing tower will be demolished and a one-acre interior courtyard, dining terrace, and connecting structures will be built.

According to the project description, “the new facilities will unify the 14-acre campus both functionally and architecturally. So even as the hospital reaches for the future, they’ll harmonize with the past, respecting and complementing the elegant facade that has graced Oakland since 1927.” Carl Christiansen, Vice President of the architecture and engineering firm SmithGroup, said “Our team’s design solution is inspired by the campus’ historical significance. We have included simple building facades that reflect the scale and tone of the existing campus and pay homage the master plan from the 1920s.” That will include salvaging some of the historic materials from the demolished buildings and rebuilding them as architectural elements in the construction and the landscape and reestablishing a central outdoor courtyard that was part of the original hospital’s campus.

The Highland Hospital project is designed to earn a minimum LEED Silver certification from the U.S. Green Building Council. The project’s sustainable components include an innovative thermal storage concept that will lower energy costs, exterior green screens that cool and shade the interiors, and use of sustainable building materials. In June, the completed Highland Care Pavilion received LEED Gold certification.

Highland Hospital opened its doors in 1927 and has been Alameda County’s major source of acute care for low income residents and people without health insurance coverage. It has the county’s busiest Emergency Department, with over 85,000 visits annually. In 2004, the hospital opened a new emergency care, outpatient, and surgical facility. Highland is one of the County’s largest employers, providing more than 2,600 jobs, and is the largest teaching hospital in the East Bay.

The public hospital receives about $80 million in taxpayer funding annually. The overall cost of the new hospital complex is $668 million, funded through bonds. The $430.8 million construction contract is the largest healthcare investment in the history of Alameda County. 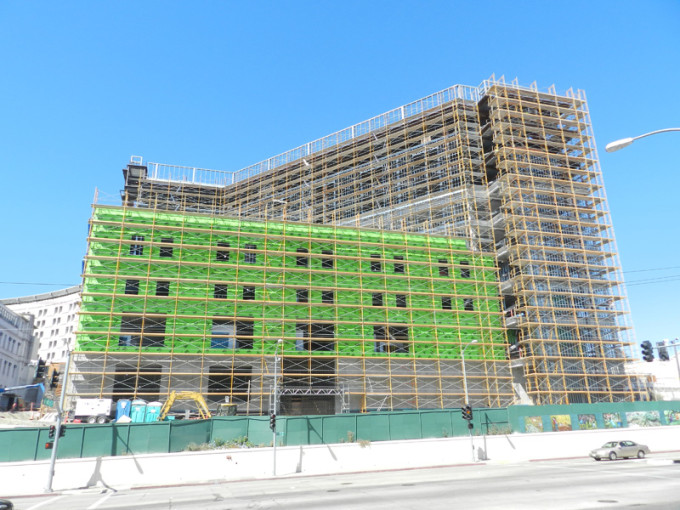 Scaffolding around Highland Hospital’s new Acute Tower was set up this summer, after the steel frame structure reached the ninth floor. 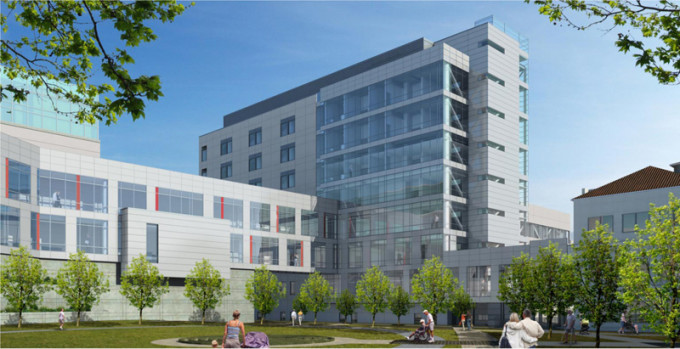