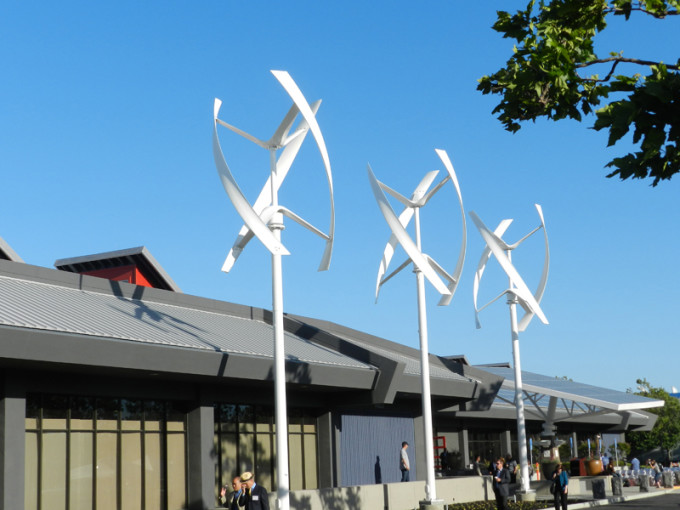 IBEW Local 595 Business Manager Victor Uno thanked the union’s Trustees and leaders and the National Electrical Contractors Association (NECA) for creating the center, which he said was a fulfillment of a vision for a new model of training. “We are proud to push the envelope in the areas of energy conservation efforts, renewable energy promotion, job creation, work-force training and labor-management cooperation,” Uno said.

The ZNE Center is the first large-scale commercial building retrofit designed to meet the U.S. Department of Energy’s requirements for a “zero net energy” building. The 46,000 square foot facility will serve as an educational facility for 2,000 apprentice and journey-level electricians in Alameda County who will participate in a program run by IBEW Local 595 and the Northern California Chapter of NECA.

NECA’s Northern California Chapter Executive Director Don Campbell told the diverse crowd of over 500 people that, “This is the most important grand opening event I’ve been part of—it shows what labor-management cooperation can accomplish.” Campbell told attendees that the center “utilized new technologies, advanced building designs and innovative construction methods to achieve a dramatic and unprecedented 75 percent reduction in energy use when compared to similar existing commercial buildings in the country. This energy savings lowers the ZNE Center’s carbon footprint by 175 tons of carbon dioxide per year—equal to the carbon emitted by 30 passenger vehicles annually as well as a savings of 500 barrels of oil each year.” The project includes wind turbines and solar panels that produce 139 kilowatts of energy to offset the building’s energy use.

Congresswoman Barbara Lee said the ZNE center would “make a huge impact for the economy,” with job training that is an example of environmental and social justice and that creates good paying jobs. “My District is home to some of the most innovative and progressive constituents in the country,” Lee said. “This center will provide state-of-the-art training for electrical workers. I’m thrilled to see it open its doors in my district and to see Labor take a stand for renewable energy use and good jobs. They are not mutually exclusive—we can develop renewable energy and create good paying union jobs.”

San Leandro Mayor Stephen Cassidy said the city was becoming a “hub of innovation,” with a high-speed broadband infrastructure, a new union-built Kaiser hospital, and now, the ZNE Center. Cassidy noted that in 2030 state law will require that all new buildings must be zero net energy. “The future of building construction exists today at this ZNE Center,” he said. “You have created a model to address issues of energy use. We can’t wait until 2030 to build net-zero—we must incorporate these ideas now to renovate existing buildings. Who better to do it than the next generation of electrical workers who will be trained here and build California’s infrastructure?”

The ZNE Center’s innovative building design features and state-of-the-art technologies enhance its capacity to reach zero net energy. These same building features are also incorporated into the curriculum for the education and training that will take place within the ZNE Center. With access to the most cutting edge technologies in wind, solar, solar thermal, lighting and building automation systems, apprentice and journey-level electricians and the industry at large will be equipped with the knowledge and practical skills to install, operate, maintain and improve upon renewable and energy efficient systems.

Advanced building automation systems control lighting and ventilation and help reduce energy use. Since lighting makes up about 40 percent of an average building’s energy use, the ZNE training center’s offices and classrooms have windows that flood the space with a bright but even light. Ambient-light sensors in the room turn on LED light fixtures if more light is needed and shades on the skylights and side windows can be controlled manually or automatically to darken the room.

“This remarkable facility is a shining real-world model for education and training,” said Byron Benton, Training Director for Alameda County’s JATC. “We are celebrating the realization of our collective vision for a more sustainable world where young men and women will be trained for good paying jobs and new economy careers.” Benton noted that the ZNE Center is the only one of the 21 ZNE buildings in the U.S. that is a retrofit of an existing building. He said there are hundreds of thousands of existing buildings crying out for energy retrofits, and trained workers are needed for the projects.

Benton outlined some of the elements of the JATC apprenticeship program and said the ZNE Center would “Create the best trained, most skilled workers for the new economy of energy efficiency and renewable energy.” He said the building’s use of natural lighting and natural ventilation would not only reduce energy use but also create an enhanced learning environment.

State Senator Ellen Corbett said the center would “set the standard for the world” and “train men and women for the sustainable jobs of the future.” She presented a Resolution from the State Senate and Assembly, along with representatives from the offices of Assemblymembers Bill Quirk and Rob Bonta.

Diane Ravnik of the State office of Apprenticeship Standards praised the IBEW and NECA for providing world class training for over 60 years and said the ZNE Center would be “the gold standard” in the state. Dan Geiger of the U.S. Green Building Council said green building innovations are catching on around the world. He said that 40 percent of carbon emissions come from buildings and that while some regulations call for reducing carbon emissions by 50 percent, the IBEW-NECA training center is leading the way for zero-net carbon emissions.

IBEW 9th District International Vice President Michael Mowrey said the center was “not just about innovation, but a tribute to craftsmanship and the union employers and union workers who built it.” Mowrey said he had started working in 1974 as part of the crew building the Diablo Canyon nuclear reactor. “It was my bread and butter, but there was conflict,” he said. “This building is a demonstration of how we have changed, where labor and environmentalists come together for the economy and the environment.”

NECA’s 9th District Vice President said one way to be economically secure is to spend less. “We can be more secure by spending less energy than we make. This is a model that can be replicated as a way to have energy and economic security,” he said. “It’s a lesson in synergy, where labor and management work together so that one plus one equals more than two.”

Governor Brown said that while, “We live in Twitter time, we have to think long term.” He said that building something new takes time but the model of the ZNE center can be replicated. “We can create millions of jobs or hundreds of millions of jobs around the world,” he said. Brown said he wanted to push for more apprenticeship training where people can “work and earn instead of borrow and learn.” He said, “The bold stuff is really important,” and commented that his own forward thinking was “how I got the nickname.” He joked that, “I’m not as far ahead as I used to be” and said he was trying to be mainstream. “This building is mainstream,” Brown said. “It is simple and elegantly designed and a great example of balance of innovation and functionality. This is the future.”

After a ribbon cutting ceremony, visitors were invited to tour the Center and check out the classrooms and learn more about the building and the training that will take place there. A new session of classes will begin in August.

IBEW Local 595 encompasses Alameda County as well as San Joaquin/Calaveras Counties and is one of the largest IBEW Locals in Northern California with over 2,000 active members and retirees who work in a wide variety of fields, including utilities, construction, telecommunications, broadcasting, manufacturing, railroads and government.  The National Electrical Contractors Association is the voice of the $130 billion industry responsible for bringing electrical power, lighting, and communications to buildings and communities across the United States. It is the voice of the electrical contracting industry, working to promote higher standards, quality workmanship and training for a skilled workforce.
– Paul Burton