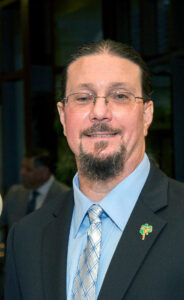 Greg Bonato is member of IBEW 595. He began his apprenticeship in the fall of 1993. After turning out as an Inside Journeyman Wireman, he has served his local in various capacities, such as teacher aid, Political Director and Delegate to several Councils. He has been elected to numerous positions within
IBEW 595. Greg has been a Delegate to the Alameda County Building Trades for the past 5 years and has been on the Executive Board for the past 4 years. He also serves as the PEC chair of the ACBTC. Greg Currently serves as a Business Manager for the Local.